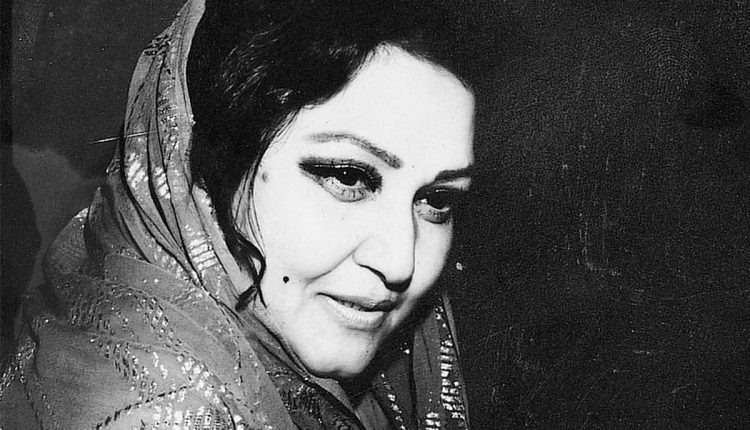 From Allah Wasai to Noor Jehan Malika-e-Tarranum (The Melody Queen) Noor Jehan was born in 1926 in the border town of present day Pakistan Kasur in the family of professional musicians singing for local landlords and notables of the villages.

The family also performed in local theatre at seasonal fairs. Her parents named her Allah Wasai. Noor Jehan is said to have received the classical form of music from Ustad Ghulam Mohammad. However, she stepped into the world of fame and film when she went to Calcutta somewhere in 1935. Calcutta at that time was an important centre for films, unlike Mumbai today. She started with small roles on stage, theatre and then film as juvenile star. However, singing was her passion and Lang ajaa patan Chena daa, her first song for the film Pind Di Kuri in 1935 was a cue for some eight decades of melodies.

In 1938 she came back to Lahore and did a number of Punjabi films. However, it was her songs like Bas bas vey dholna that got her recognized as a great singer. During the making of film “Khandaan”, she came close to the fil director Shaukat Hussain Rizvi and the two were married in 1944. She kept on working films in supporting roles, but it was “Nadaan” (1943) that marked the beginning of the phase of her career as a top actress/singer. In 1945, she played brilliantly in “Zeenat”, directed by her husband Mr Rizvi. The film is still remembered for its memorable songs, like “Aahen na bharen shikve na karen, Kuch bhi na nazar se kaam liyaa.” The film celebrated a silver jubilee. Thereafter, she rose to be a lead actress and many a memorable films bore her name. Noor Jehan’s career was at its peak. She was just twenty years old. In 1947, she appeared in lead role in “Jugnu” with Dilip Kumar. Both the film and the songs became an instant super hit.

Noor Jehan in Pakistan: In 1949, Shaukat Hussain Rizvi and Noor Jehan migrated to Pakistan and initially came to Karachi. But then decided to go to Lahore. Together they set up Shahnoor Studios. 1951, Noor Jehan directed her first film “Chan vey” (Ve Mundiya Sialkotia famed) and also became the first woman film Director in Pakistan. In 1952, she starred in Dopatta, which was also released in India and all the Noor Jehan songs were hits (Tum zindagi ko gham ka fasaana bana gaye). Thereafter, while she worked in films, he melodies started being echoed all over the country and more than an actress, she was admired as a singer. Memorable songs like “Chand hanse, duniyaa basay, Mehki fizaayen.” However, her success in films was taking a heavy toll on her married life, which finally fell apart, with her three children from Rizvi. In 1959 she married Ejaz and decided to quit acting. She also sang ghazals, which were equally super hits like “Mujh se pehli si muhabbat, Dil dadakhnay kay sabab yaad aya ” etcetera. In early 60s, “Kabhi ham bhi tum bhi thay aashna” hit the charts. Her famous Dhamal “Dama Dam Mast Qalandar” is still sung by all types of singers when making their debut. In 1970, her memorable and melodious songs in the film “Heer Ranjha” made it a country wide success and the songs are still afresh in the memories of many, with Firdous acting as Heer. The success of Heer Ranjha also had a counter effect on her life – her marriage broke once again. Thereafter, she continued to sang, more in Punjabi films and her instant hits like “Sano nehr walya puul tey bula key, kehnday ne naina, Sun vey bilori akh waliya, kuch log rooth kar bhi, etc” topped charts all over Pakistan.

“Aye Puttar Hattan Tay Naeen Wikday (These sons are not for sale on shops)”: The 1965 Indo-Pak war gave a new dimension to Noor Jehan’s personality and her singing. The war provoked in her the spirit and motivation to sing national songs day and night for free. All along the border, her voice gave a new life to the soldiers and raised their morale. “Aye watan key sajeelay jawano, Rang laye ga shaheedoon ka laho, Mera mahi chail chabeela, and Aye Puttar Hattan te Nain Wikday” were some of the songs that she sang while rushing to Radio Pakistan Lahore in blind darkness of black out nights.

“Gaye gi Dunniya Geet Meray”: After prolonged illness, the voice of Eastern Nightingale finally silenced in January 2001, that ruled the charts for over eight decades. Her contribution to music was tremendous as she sang both in Urdu and Punjabi with equal brilliance. Perhaps for a long time to come, no female singer would be able to reach where Noor Jehan stood. Although the government acknowledged her work by awarding the “Pride of Performance Award” to her, making her the first woman to be so honoured, her reward was her millions of fans all over the world who flocked her whenever she was around. Her melodies will always remain in the hearts of the people for a very long time.

Subscribe To SalamPak Newsletter
Sign up here to get the latest news delivered directly to your inbox.
You can unsubscribe at any time